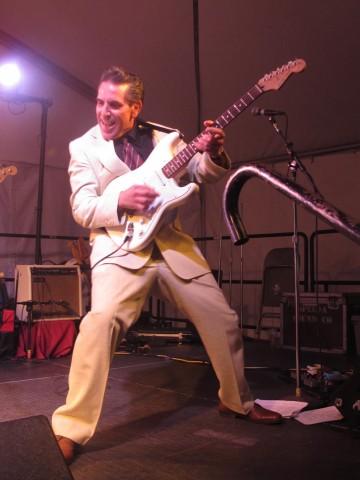 Davey Go was born and raised in Berkeley, CA. He moved to Sonoma County in 1973 to attend SSU where he earned B.A. Degrees in Music and Expressive Arts.

A veteran of the Northern California music scene, Davey played with the local group Aircastle for eight years in the 70's and early 80's. Aircastle was a favorite of the late Kate Wolf and was even joined on stage one night by Jimmy Page!

In the mid 80's, Davey joined another local group named "Fire" and spent three years touring the Holiday Inn/Hilton Hotel Top-40 band circuit. In the mid 90's Davey met Jane Sorensen and her Poyntlyss Sistars. Thus began a collaboration which has culminated with the latest and greatest version of the group, The Poyntlyss Sistars Rockin' Show Band. Davey has released his solo CD, "Pancakes Have No Bones", on the ECCA label.

In 2007, Aircastle reunited and performed on stage for the first time in 25 years, opening for The Poyntlyss Sistars.